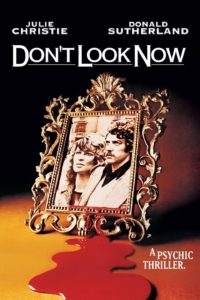 I found this little gem on the Criterion Channel. Don’t Look Now is a supernatural mystery thriller that stars Donald Sutherland and is set in beautiful Venice, Italy. The backdrop, story and acting were all superb. It really was excellent story telling. There was an unnecessarily long sex scene in the middle of it but it is important to remember this is back in 1973 when they just first started being able to show total nudity and simulated sex in a mainstream movie. I think adding a gratuitously, and at times awkward, sex scene into their movie was just too tempting. Other than that, and the thing that really ruined a great movie, was the ending. I won’t give any spoilers here but what – the – actual F ?!

This movie could easily have been in the mid 80’s as far as baldy potato scores go but it ends up with a 74%. Opportunity lost. Still worth watching.