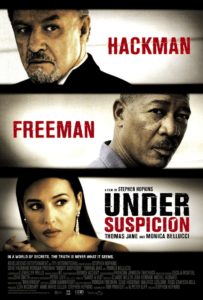 I remember watching this when it came out being impressed with it. Here I am 20 years later and I am just as impressed. The screenplay has a very stage-play feel to it. The banter is back and forth and it is good. The acting is good too. Thomas Jane joins the two juggernauts on screen as Sgt. Opie, err.. I mean detective Owens. He plays the “bad cop” role.

Other than the cast and the writing, there are two facets which are outstanding, namely the editing and directing. The director, Stephen Hopkins, does a great job of pulling off one of the more interesting aspects of the script/screenplay. The aspect of which I am speaking occurs when the characters are going over Gene Hackman’s alibi, they insert the police captain (Morgan Freeman) into the flashback as he is talking to Hackman. Its a really cool effect. Film editor John Smith does a great job of tying it all together and not letting scenes linger for too long.

This movie still holds up all these years later and even if you remember the ending it is worth viewing again. It earns a strong score of 80% on Baldy Potatoes. It makes me miss prime Hackman and all his high-pitched yelling glory.