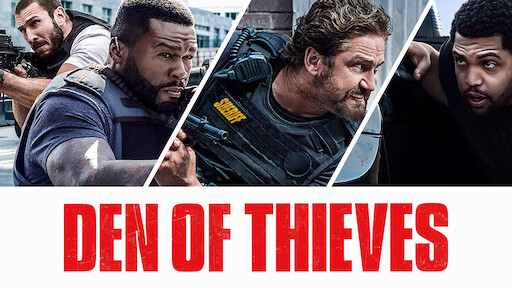 Gerard Butler isn’t exactly known for choosing boring roles so I  will pretty much watch anything with him in it. He is an intense actor and has not disappointed me very often. I don’t feel disappointed after watching Den of Thieves either but I am not sure exactly what to think.

I had a few drinks already running through me so I am unsure if it helped or hurt my attention span here. I actually think that I may have stopped this one before finishing if I didn’t have a few belts.

The movie starts off with a high intensity armored car robbery. The scene obviously took a lot from the movie “Heat” (1995). It definitely had the same feel. Then the movie goes off the rails a little and then regroups.

The cast was decent. You had Butler, Pablo Schreiber (13 Hours), O’shea Jackson Jr. (Ice Cube’s son) & 50 Cent. All did a fairly good job of portraying their character.

The direction was good and the cinematography was great. The scenes tracked well but the movie flow felt a little discombobulated. Sometimes they spent so long developing one of the stories you completely forgot about the others. Then boom, they would flip back after 20 minutes or so and you are thinking “oh, yeah, I forgot about that guy/event”.

I mentioned earlier that the opening scene was a send-up of Heat. But there are a couple of those scenes in this movie where you can tell the writer saw those movies and tried to capture what those movies did. For a fresh young audience I am sure this works well. But for anyone who has seen classic action flicks like Heat or “The Usual Suspects” it feels very derivative. The twist at the end was silly and unnecessary. The movie should have ended after the shootout, which mind you was very exciting.

With some proper editing and a few re-shoots this thing could have been really very good. As it stands I can just recommend you watch it if you are in the mood for a shoot em’ up or are a Gerard Butler fan. If you are neither of those things I say skip it. Final score on Baldy Potatoes 60%